They All Look Like Me! – The BioWare Approach to Hollywood 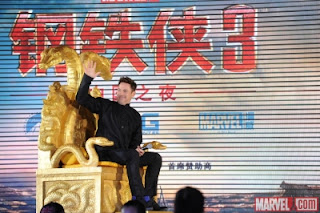 In reading up on Iron Man 3 I learned of a trend that is very quickly creeping in to major Hollywood productions, and that is the inclusion of specific scenes for Asian markets to help drive up interest in those respective countries. To be more specific part of Iron Man 3 was filmed in China and some scenes, which will only appear in the Chinese release, will feature major Chinese stars doing—something. I honestly don’t know what or how this even works.


As someone who is white, male, and heterosexual I, by default apparently, oppress everyone else on the planet by simply breathing in and out. I can’t possibly understand the trauma endured by someone who has to watch a ridiculous summer tent pole movie and not see someone that looks and sounds exactly like them in it in a pointless supporting role.

This trend suggests that watching a vapid, soulless (and spineless), Hollywood blockbuster film full of ‘splosions and bewbs doesn't interest Indian or Chinese audiences. So rather than fund a picture that will cater to their specific sensibilities, Hollywood’s approach is to slap together a 30 second scene with a foreign face that can be pointlessly spliced in and those whacky foreigners will kick down the doors of the multiplexes to see it.

For starters this is insulting to the people in these countries. Either make an interesting major role in the film with a native Chinese or Indian actor, or just let it play as is.

They've already gone this far. How long until Hollywood adopts the BioWare approach to making movies?

What is that, you ask?

While probably not the first company to do this, BioWare carved a huge piece out of the video game role playing market with titles that allowed you to customize the main character. The idea of making a character look how you like was not new, what was new was that the people in the world interacted with you based on the choices you made in character creation and throughout the game.

“That’s totally amazing!” you’re saying “How in the hell did they pull that off!?!”

Simple. You write the story and the majority of interaction to be gender neutral. Based on what you chose at character creation you will now hear lines of dialogue that references gender specific to what you chose.

You only need to sprinkle in a few lines here and there which address the gender or sexual orientation directly to give the illusion of immersion. This is usually done with a love interest. And not to leave anyone out, in practically every BioWare game it’s possible to engage in a homosexual relationship with one of your companions. In some cases if you don’t pursue the right dialogue options (or have already expressed heterosexual interest in another companion) the otherwise homosexual companion is never outted. This allows homophobes to play through the game and not have to deal with “fag stuff”.

This may sound like I’m being critical, but it really is an interesting way to write a strong character. If you can swap surface characteristics and the story still works that means the character is a character first and a man/woman/Latino/Chinese/Dinosaur/Welsh second.

With that explanation out of the way; how long until Hollywood figures out a way to shoot movies in a similar fashion? The plot and dialogue is catered to be totally gender and non-ethnic specific so that they can shoot every scene in the movie eight times with a different ethnicity, gender, and sexual orientation slapped in. It would sure make them more money on the repeat viewing.

Your recklessness is out of control! You got six civilians killed with your recent shenanigans. What do you have to say for yourself?

What are you mad about? Are you mad that I get results? So what if some people got hurt along the way! Hundreds more are safe!

Oh, Charlie, you know how flustered I get when confronted or asked to make a decision. How about next time you make the decisions for me, I am a woman, after all?

Oh, Charlie, you know how flustered I get when I’m surrounded by so many sexy men like yourself in uniform. I just want to peel you out of it and massage you all over! Just in case it wasn't clear I enjoy inserting my penis into other mens' anuses and enjoy having the same done to me. I am a flaming gay man! Whoooooo!

Don’t you oppress me, breeder!

Man, y’all be trippin! Ya’ll know iz get flipped when honkeys starts pullin’ out gats. Next time they won’t be no shootin’ cuz I gonna run my black ass up outta there!

Well, straighten up and don’t let it happen again!

And scene. I should work in Hollywood. I have this all figured out.

*Apologies to any actual Spanish speakers. I basically just used Google Translate, so it’s probably all wrong.
Posted by Unknown at 7:58 PM