I’m going back on my promise not to outline a plot for these new Star Wars films. In fact the other day one of the other contributors and I brainstormed what is likely to be the next step in the Star Wars franchise outside of the proposed Episodes VII – IX.

For this exercise (and those like it in the future) you’re the studio and I’m going to pitch the movie to you. I want you to picture this: Star Wars Episode 3.5...


Let me start with the teaser trailer. We need to get the audience hooked early on, we need them behind this new take on a Star Wars icon.

Start with a black screen. Some string music plays; something sad. Fade up to the image of Padme’s funeral from Episode III. Now a distressed man’s voice comes in. “Why is he doing this?”

Fade back to black. Another voice comes over, strong, confident “Because it was his fault.”

Fade up to a series of cuts showing Jedi getting killed in Episode III. The second voice comes in again. “He doesn’t want to be remembered as the villain who betrayed the Republic.” 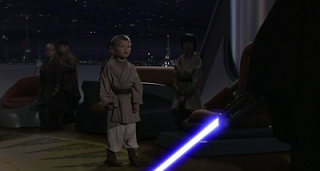 Fade to black. The second voice continues. “He’s done some wicked things.” Fade up to the shot of the dead children from Episode III. Fade to black.

Fade up to a rugged looking man we’ve not seen before, lighting a cigarette in his mouth. He takes a drag. He is the body behind the second voice. “He sees you as his only path to salvation.” He says as the smoke is exhaled. He removes the cigarette. “And he won’t stop until he’s killed every single one of you.” Fade to black.

Cut to a shot of severely beaten clone trooper, his helmet removed, tied to a chair. The trooper looks up weakly. “But, there must be a million of us.”

Cut back to the rugged man, he smiles as he takes another drag. “Do you think he cares?” 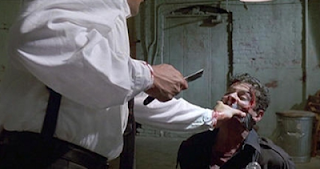 Suddenly the door bursts open behind him, a figure rushes past. Cut back to the clone trooper, who squirms and screams as a webbed hand grabs his throat. A massive blood soaked knife, is waved past camera in the struggle.

Pan up to see Jar Jar Binks, one of his eye stalks is sliced and scarred, evidence of a long healed wound. He raises the knife and then whispers “Meesa hatin’ Imperial twoopers.” The knife comes toward camera. Cut to black.

Now a series of rapid cuts of scenes of horrific violence accompanied by drum beats.

This will be Jar Jar’s revenge story. He recognizes that he was responsible for the Clone Wars and the fall of the Republic that followed. He and his rag-tag team of hired killers embark on a brutal quest to bring down the Emperor. What starts as a quest to overthrow the Empire turns into a personal vendetta, which continually escalates to the point where Jar Jar’s team begins to question his leadership and his motivation.

Opposing them is Varrwook, a Wookiee manhunter, whom Darth Vader turns to when all Imperial efforts to corner Jar Jar and bring him down have failed. Varrwook is no stranger to Jar Jar’s ways, having been on Kashyyyk when Jar Jar’s team came through and slaughtered Imperial sympathizers. Varrwook’s brother was killed and he would have been too, if he hadn’t hid, a cowardly act that he hopes to avenge with Jar Jar’s death.

We’ll try our hardest for an R rating, but as the script plays out now there’s some pretty graphic stuff in it. Naturally we can save that stuff for the Blu Ray release if we can’t talk the studio down. Right off the top of my head the scene where Jar Jar tortures Moff Arrard’s wife, cutting out her premature baby, will likely make its way to the cutting room floor.

What do you say? I need about 45 million to make this picture. I already have Ahmed Best back to reprise his role as the beloved Jar Jar Binks. Also interested are Danny Trejo and Russell Crowe.
Posted by Unknown at 8:40 PM