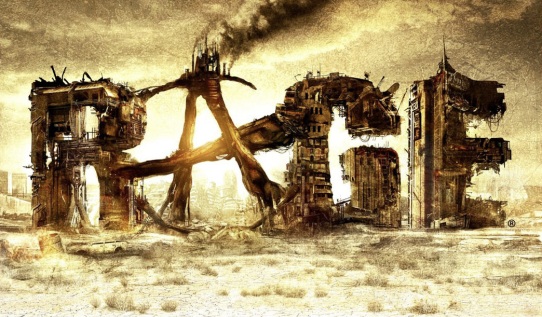 id Software has been making game engines for a long time, id Tech 5 being the primary subject of this first impressions, but that’s not always been their focus; John Carmack, John Romero, Tom Hall, and Sandy Peterson used to make games.

By 1997 Romero and Hall had left id Software to form Ion Storm, a short lived studio remembered for the miserable failure that was Daikatana (2000), and the critically acclaimed Deus Ex (2000) - one of my all time favourite games. Peterson, who was responsible for many of the levels of DOOM, DOOM II, and Quake, went on to join Ensemble Studios (Age of Empires game series). Carmack was always a graphics engine programmer, who developed the DOOM engine alone while the rest of the team finished the Wolfenstien 3D sequel, Spear of Destiny (1992). Unfortunately, without the whole team the games suffered, although Carmack’s talent as a game engine programmer never faltered. Quake II (1997) was a huge success at the time, and well received by critics – Quake III Arena followed suit, although a trend was beginning to appear: while Valve had taken the source code of the original Quake engine and made Half-Life (1998), a wonderful story-driven game, Quake III (1999) arrived as a multiplayer only experience. The Quake III engine (id Tech 3) went on to be licensed in over 15 other popular games, including American McGee’s Alice (2000), Star Wars Jedi Knight II: Jedi Outcast (2002) - the sequel to Dark Forces II, and the original Call of Duty (2003). id Tech 3 even had a good old fashioned rival: the Unreal engine.

The id Tech 4 engine (aka the Doom 3 engine) was an incredible thing to behold, and DOOM 3 made for great demo material to show off the engine to potential licensees. Unfortunately for id, all did not go to plan and Epic Games’ Unreal 2 and 3 engines dominated the market, and Valve were licensing their own Source engine that could still run on older, more common graphics cards. id Software’s disappointing license sales could also be attributed to the strict licensing agreement and the long development time for DOOM 3 (which had to be the first game to ship using the new engine).

This brings us to id Tech 5; first used in id Software's own RAGE (2011), and unlike their previous engines, it's not available for external licensing (except by other ZeniMax subsidiaries). This is a beautiful looking engine, in screenshots anyway. My BFG Tech GeForce GTX 260 struggled a bit with RAGE, and was probably one of my excuses for not playing more than two hours. The game reminds me of Borderlands (2009), at least the early screenshots, the final version of Borderlands almost certainly benefited from the unique art style that Gearbox chose. The vehicles in RAGE were reminiscent of Borderlands too, and then there’s the story in RAGE: the player character, known as Vault Dweller Ark Survivor, wakes up in a vault an ark in a world desolated by a nuclear war an asteroid strike, surrounded by crazed mutant bandits, and helping societies living on the edge in this desolate world – sounds familiar? So the gameplay isn’t original, neither is the story. It stutters around like a three legged gazelle on my PC, and while I cannot claim to speak for everyone, it’s the only game I own that’s unplayable on all but the most conservative settings. Quests where more reminiscent of a MMORPG’er than Fallout 3 or Skyrim, and that is never a good thing. The soundtrack was forgettable, and that is something id Software should be ashamed for. DOOM had a brilliant soundtrack, and the music in the original Quake was composed by Trent Reznor (the NIN logo appears on the nailgun ammunition boxes in the game), I still have that CD in my audio rack.

I may go back and try RAGE again one day, I'm told that it’s not a long game, but I will need to invest in a beefier video card before I do. At the end of the day RAGE is a very pretty, albeit flawed game, but I do believe id Software is moving in the right direction – focusing on story elements to drive gameplay instead of designing engines to sell to other developers.
Posted by Unknown at 9:00 PM

Email ThisBlogThis!Share to TwitterShare to FacebookShare to Pinterest
Labels: Games