First a little background, in case you care. Bucky was Captain America’s side kick during the Second World War. He was presumed dead, a tragic incident that Captain America carried with him for many years. But like any good soap opera Bucky wasn’t dead, he was taken in by the Soviets, who turned him into their own super soldier, and unleashed him as a brain washed assassin during the cold war, conveniently putting him in stasis between missions so he could be in his 30s or so come 2012 when the book begins. Black Widow’s story is kind of the same. Brainwashed super assassin, stasis between missions, young and gorgeous in the 21st century. 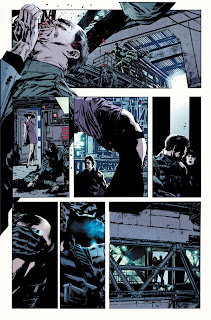 Are you up to speed? Of course there’s more back story, like how Bucky and Black Window both came over to the good guys side, or how he lost his arm (filling in as Captain America), and the relationship he has with many of the other Marvel super heroes, but actually this book barely touches on that, and that’s why I love it so much.

Unlike every other goddamned Marvel title Winter Soldier just focuses on these two characters for the vast majority of its run. It’s not until issue 10 that other heroes show up, and their appearance is superbly handled. Wolverine doesn’t show up just because he’s awesome and fans love to see him goofing around, he has a real purpose in the story, a stake in the events.

So what’s it about? It’s a classic cold war mystery adventure, but set in the modern day. Sleeper agents have been awoken, but by whom, and for what purpose? Bucky and Black Window have to get to the bottom of it. While there are several start and stop points along the first 14 issues, ultimately they cover a single arc about uncovering the madman behind the awakened sleeper agents. 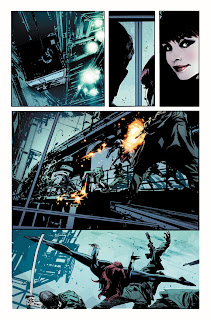 The art in the book is amazing (most especially the books drawn by Butch Guice). It took me a little while to get used to it, but once I did I was enthralled. It’s like something out of a 60s spy adventure, it really is essential in setting the mood. In most of the action sequences they avoid writing out the cartoony sound effects or having the characters engage in inane dialogue. These two are professional killers, there is no time for quips. Are you listening, Peter Parker? Super heroing is serious business!

Everything wraps up in issue #14 and the ending is heart breaking. It’s rare that something can crack this stone cold heart of mine, but this book managed to do it, and how? Because instead of clowning around, shoving in every character in the Marvel menagerie  into the book, they focused on these two and made me care about them.

Winter Soldier #14 is a great point to review the series up to now as it represents a year of the comic’s release and also a transition to a new creative team, which if it’s like any of the other recent creative choices at Marvel will result in me no longer reading this book.

I highly recommend Winter Soldier through issue #14. If you don’t care to drop the cash on all the issues two of the TPBs are out and I can’t imagine the third one is far behind.